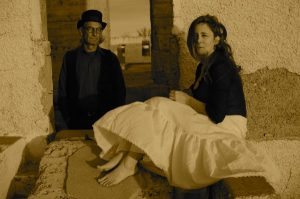 Elena Antinelli is a hidden talent, unearthed when she met her now musical and life partner, Frank Meyer, with whom she co-founded the Paper Moon Shiners in 2011. Her first foray as a singer into the world of live music is branded by her fiery, inherent talent which leaves audiences astonished at the gorgeous brazenness of her performance. Elena’s musical vision is strongly influenced by her wonder and nostalgia for things almost forgotten. From reading old books through dust-speckled sunbeams in Chicago antique stores to exploring countryside abandoned buildings in her home state of Texas, the call to revive a story from forgotten spirits lives strong in her musical aesthetic.

“I’m grateful to have found such a positive and creative way to express my inner landscapes and each show possess a journey of emotions captured subtly in a beautiful ballad or tumultously in gutteral blues piece.” –Elena Antinelli

Frank Meyer‘s musical career, on the other hand, has spanned almost 50 years. He played bass for years with harmonica virtuoso Gary Primich as well as other blues legends, including B.B. King. He has written and continues to write dozens of songs and has released three all-original solo albums. In their collaboration, Frank applies his original melodies and poetry to Elena’s gift for creating a vision and a story; the result is a collection of lush musical gems. Their shared desire to tell musical stories and their fascination with the 20th-century American songbook inspire them to make music that is truly unique.

“Songwriting is like building a treehouse. Once there is a tree there; it’s just a matter of filling in the missing parts. It seems scrounging the pieces is always richer than buying them at the store.” –Frank Meyer

As original, clever, dark, droll and engaging as their songs are, it is their live performances that make the Paper Moon Shiners shine among their contemporaries. Elena’s strong yet flute-like, versatile but elusive singing suggests tones of Annette Hanshaw and Bessie Smith. Her stage presence and antics evoke the ghosts of vaudeville and cabaret. This, coupled with Frank’s projection of his basso profundo voice, his spirited command of the ukulele, and his facility to charm haunting tones out of his antique, steel body resonator guitar generates a mysterious energy and sound that defines a Paper Moon Shiners performance. They weave a sly and subtle magic, not to be missed. 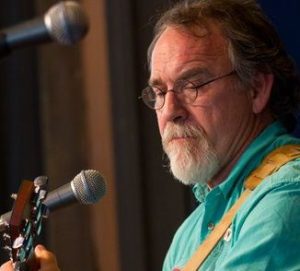 Randy Palmer has performed folk/country since 1967, focusing on songwriting, guitar and solo and band projects. He received his bachelor’s degree in Radio/Television/Film from Baylor University and is a member of the Texas Folk Music Alliance and the Folk Alliance. He earned finalist in the 2011 New Folk Songwriting Contest at the Kerrville Folk Festival. Palmer also earned three ADDY Awards for his advertisement jingles for Palmer, Meader, and Holmes. He taught songwriting workshops for the Panhandle Professional Writer’s Association in 2010 and 2011 and has been a guest lecturer on songwriting for Amarillo College’s Creative Writing Program since 2008. He released his first record, Fighter by Nature, in 1975 on RoRo Records. He released his second record, Calling Me Home, in 1979 on Heartland Productions. He has just released his newest album titled ‘Waterline’.

For more information, go to http://www.randypalmermusic.com/.