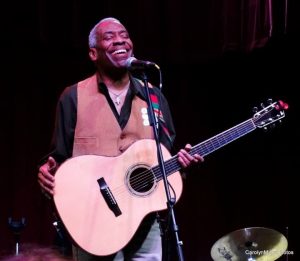 Singer /songwriter Reggie Harris has been a vital part of the international folk and acoustic music family for over 40 years.

As one half of the duo, Kim and Reggie Harris, he traveled the world spreading hope and light to audiences of all ages. Reggie is consummate musician, a Kennedy Center teaching artist, a Woodrow Wilson Scholar and the music education director for the UU Living Legacy Project, an organization that leads pilgrimages to sites of the Modern Civil Rights movement throughout the South.

Now launched on a solo career, Reggie continues to earn wide acclaim and standing ovations from audiences and peers throughout the U.S., Canada, and Europe. With the release of his  chart topping CD  “Ready to Go” Reggie has staked a new claim as a song leader, an insightful songwriter and an activist for global peace and justice.

For more information, go to http://reggieharrismusic.com. 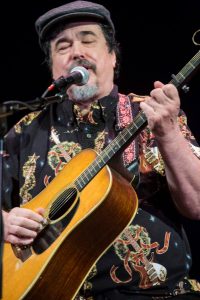 Wayne Greene brings over 40+ years of performing to the stage with a mixed bag of folk, pop, blues, and ragtime songs. Originally from Louisiana where he played in rock bands in the ’60s, Wayne has been
based in Texas playing acoustically in coffeehouses, clubs, colleges, and festivals since the early ’70s. Wayne likes to write songs about people, real or imagined, that tell a story. His conversational style makes him accessible to the audience. He does like to slip a
hit from the 60s, a 40s swing tune, or sometime a song from the ragtime era into his set.