You are here: Home / Events / The Rough and Tumble with Andrew Sullivan opening 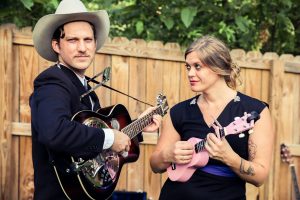 The Rough and Tumble…used to say that they “used to say they were from Nashville, TN.”  But nearing the end of their third year on the road full time with their original rescue tour dog, Butter, and her kid sister, Puddle, who was picked up along the way in Alabama, it’s hard to say if they are from anywhere at all.  Pennsylvania-born Mallory Graham and California-born Scott Tyler have lived in their 16’ camper since 2015, making tire tracks nationwide since 2011.  Their history goes back as far as New England in the fall of 2007 and as close as going from friends to bandmates to married bandmates.  The story is as linear and circular as any, but one thing stands out:  Their home is the road.  But also, it’s not.

With the upcoming release of their first full length record, We Made Ourselves a Home When We Didn’t Know (2018), the folk-Americana duo retraces their mileage back to their footsteps and explores the struggle between going home and being home already when there’s no other home and everywhere is home.  Recorded in East Nashville with Dave Coleman, The Rough & Tumble invited a couple of musician friends from their sad-singer-songwriter and rock-n-roll-rebel days to accompany them on a portrait of what has happened so far, and what they hope is still to come.

We Made Ourselves a Home When We Didn’t Know comes after a long line of first EP’s (three, to be exact from 2011-2012); a year-long, 24-song, tongue-in-cheek writing project called The Rough & Tumble’s Holiday Awareness Campaign (2013); a soundtrack for a short film about women, war, and PTSD called Pieces and Pieces (2016); and their latest EP, Cardboard and Christmas Lights [(2017)( Rock Candy Recordings)].

Prolific songwriters and born-travelers, The Rough & Tumble are already planning their 2018 on the road, spanning from coast-to-coast, and are writing toward a 2019 release.  They are willing to consider stopping, should the music run out of them and the road end.  But until then, they are likely cross referencing a map to a calendar at this very moment for a show near you.

Andrew Sullivan is a 30-year old singer/songwriter from Fort Worth, TX. Andrew grew up in Willis, TX before attending TCU in Fort Worth and starting a career in music. Along with four studio releases since 2010, the country/ americana performer has spent over 3,000 hours on stage. For more info, see www.andrewsullivanmusic.com.