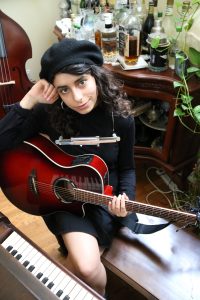 Amanda coined the genre “Immigrant American Folk Music” for herself and her music upon realizing that there are very few people that do what she does, in terms of blending true stories of exile, disapora, and tradition with modern American folk music. All of the stories she writes about are true and most of them pertain directly to her family and her father’s experiences as a refugee from an Eastern European concentration camp.

Renaissance woman and singer/songwriter, Amanda Pascali was born in Queens, New York and is based in Houston, Texas. Amanda’s Immigrant American Folk Music showcases her traditional influences, but she is no copy of anyone. As the daughter of an Eastern European refugee with Sicilian heritage, Amanda writes with a sincerity which shows us that home is truly where the heart is. Accompanied by accordion player “Uncle” Felix Lyons, and violinist Addison Freeman, Amanda will release her trio’s full-length, debut album- “And Yet It Moves” on December 21st, 2018. Her music, as it has been played for packed houses in Italy, Romania, and the United States, delivers a powerful message on being “too foreign for here, too foreign for home, and never enough for both”.