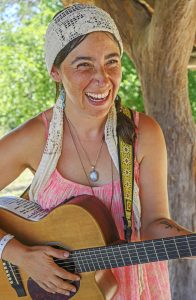 Vanessa will share the story of entering motherhood late in life after years of working as a touring musician, then coming out of a period where she felt depleted and exhausted, realizing the need to claim her purpose and passion once again post motherhood. Vowing to start saying yes to opportunities instead of a constant “No, I just can’t”…which led her to record a demo of a new song, enter a songwriting competition with it, win the Artist Activist Award, come home and start what is now a nonprofit called Home Street Music. She’ll expand upon the speech she gave at Southwest Regional Folk Alliance, and sing a few songs to tell more about the struggle and personal obstacles she had to face to open herself up again to say YES to life.
Austin, Texas based songwriter Vanessa Lively creates an eclectic blend of folk & world music that beautifully joins heartfelt lyrics with soulful vocals. Drawing on a compelling mix of tempos and styles that embrace hints of urban, world, Latin, funk and pop, Lively’s songs fully capture her compassionate nature and love of community. Margaret Moser of The Austin Chronicle describes Vanessa’s music as “folk music on fire with worldly rhythms and a Latin pulse.” Lively was named one of the Top 10 Artists of the Year by NPR Affiliate KUNC in Colorado and was featured in Austin Woman Magazine (March 2019).  In 2017, Lively was honored by two of her folk heroes Peter and Paul (of Peter, Paul and Mary) when she was granted the Artist Activist Award by Music To Life. With this award she founded a nonprofit called Home Street Music which works with people who have experienced homelessness.