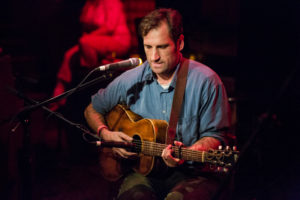 This will be held via Zoom.  Meeting ID and password will be sent via email.  mail [email protected] for the information if you are not on the email list.
Was the political philosopher Antonio Gramsci correct?  Does ossified, old world thinking have to die away — almost entirely — in order for a new way of thinking to be born, or is it more that these modalities grind against one another in perpetual parallel, alternating between periods of amplification and periods of contraction — sometimes even at the same time?  Such questions will be touched upon through the medium of song.

In his 20s, he spent a searing Wyoming summer prepping gruel for Dornan’s chuck wagon beneath the Teton’s purple haze; taught Eco-Ed to middle schoolers among the butterscotch-laced pines of the Black Hills; trekked the sage and occasional cottonwoods with underserved youth in southern Idaho; and explored the cultures of Belize, Guatemala, and Honduras.  (He never saw the resplendent quetzal that reportedly, “hung around the Coca-Cola sign” near Coban, but he did manage to see a sad, lonely motmot at the Jaguar Reserve.)

By his 30s, the muse pulled Dave to the luster of the Cambridge folk scene where he completed his first CD, “The Burn of Summer.”  The album enjoyed regular airtime on folk radio’s WUMB, Emerson College’s WERS, and produced a finalist selection for the nationally syndicated Mountain Stage Emerging Artist competition.

His second album, “Gilding the Lilies” was recorded with the assistance of Lloyd Thayer’s unorthodox lap-steele, as well as the shrewd production/instrumentation of Jared Fiske.  The CD was released in the fall of 2011 and was distributed internationally.

Dave is currently based in Northampton, MA and tours the subterranean folk pockets of the Northeast, Southern California and Texas.  He’s currently working on his third collection of songs to be released in 2020.

If you would like to join us on Zoom at 10:30 a.m. please email us at [email protected]