You are here: Home / Events / Trout Fishing in America with Dana Louise and the Glorious Byrds opening 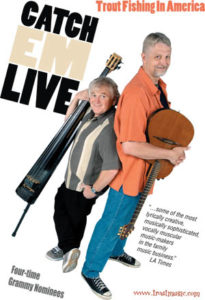 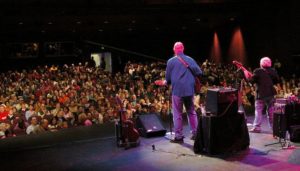 Bass player Keith Grimwood and guitarist Ezra Idlet, together, are Trout Fishing in America.  Trout Fishing in America is the long-standing and yet seemingly unlikely musical partnership of Keith Grimwood and Ezra Idlet. As individuals, they are about as different as one can imagine. Together, they blend seamlessly in a way that has captured the imagination (and hearts) of audiences of all ages for over three decades. Ezra on guitar and banjo stands 6’8″ tall while Keith on bass stretches to 5’5 1/2″ on a humid day. Ezra is more playful and extroverted while Keith is more serious and reserved. Each of them bring out the best in the other and the joy that comes from this musical interaction is contagious and impossible to deny.

The duo has earned four Grammy Nominations and recently released “Rubber Baby Buggy Bumpers”. Try saying that five times fast! The CD features tongue twisters, mind-benders, spooky situations and instantly identifiable slices of a kid’s life. In September 2010, they changed gears and released a folk/pop CD called “Lookin’ at Lucky”, the first full length CD for adults in 11 years. Included in their catalog is a children’s book/CD “Chicken Joe Forgets Something Important” published through Secret Mountain. The spoken-word tale is followed by 11 original songs relating to the story. Real people and animals in Keith and Ezra’s lives inspired the characters in the songs.

A brief history of Trout Music: Keith began playing music professionally when he was still in his teens. In school, he made the Texas All-State Orchestra four years and later earned a degree in music from the University of Houston. At 22, he landed a position with the Houston Symphony Orchestra. Keith put himself through college playing pop music in local clubs and that led to his fortuitous meeting with Ezra. Ezra attended McClennan College in Waco, Texas on a basketball scholarship. He was a “One-and-Done” player, but not exactly because of his incredible basketball skills. Instead, he decided to leave college and pursue his true love, a lifetime of playing music. In 1976, Idlet and Grimwood met as members of the Houston based eclectic folk/rock band St. Elmo’s Fire. Ezra and Keith became the best of friends and musical partners. When St. Elmo’s dissolved in 1979, Trout Fishing in America (named for Keith’s love of Richard Brautigan’s writing and Ezra’s love of fishing) was officially born.

Trout Fishing in America was in the first wave of artist owned labels (Trout Records) to successfully record and market their own music. In 2008, Performing Songwriter Magazine chose Trout as one of the top 100 most influential independent artists in the past 15 years. Their infectious mix of folk/pop and family music is the result of their diverse backgrounds as well as growing up in the musical melting pot that is Texas. Their recordings have garnered three National Indie Awards, multiple Parents Choice and NAPPA Gold awards, the American Library Award, as well as four Grammy nominations. In 1992, Trout relocated their families to the Ozark Mountains of Northwest Arkansas. Besides being a lovely place to live and raise a family, this central location helped to expand their touring territory to all 50 United States and several Canadian provinces.

Since the beginning, Keith and Ezra have played shows for kids as well as adults. Sharing knowledge and encouraging art has become another musical mission of TFIA. In the past few years, they have developed a variety of songwriting workshops for teachers and students that illustrate how art and music come from the fabric of everyday life. Their willingness to make fun of our most annoying habits in one song, then touch our hearts with tender and passionate images of family life in the next is what makes the connection between Trout Fishing in America and their audience so real.

About Dana Louise & The Glorious Birds 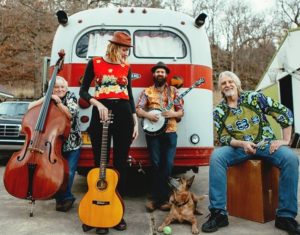 During a solo journey to the Azores Islands in 2011, Dana Louise, a visual artist, taught herself to play guitar. The daughter of Ezra Idlet of the Grammy-nominated Trout Fishing in America, Dana forged the beginnings of her sound, practicing amidst the archipelago’s lava rocks and dragon trees. Back in the States, she began singing and songwriting professionally, touring regionally and internationally, and is currently touring her debut album with Trout Records.

Joined by the Glorious Birds — Adams Collins (vibraphone and 5-string banjo), and Ezra Idlet and Keith Grimwood (Trout Fishing in America/guitar, percussion and bass) — Dana brings her vibrant, melodic vocals and finger picking to a body of complex songs. Drawing from jazz and bluegrass, carrying a contemporary beat, the sound is roots-rooted flung-into-the-future folk. Dana Louise and the Glorious Birds work to leave their audiences glowing with the magic music can bring: genuine human connection.

Note: The suggested donation for this show is $20/$15 students and seniors.