“So where have they been hiding James Lee Stanley? We could say that James Lee Stanley is probably the last great undiscovered singersongwriter in America. But true as that may be let’s say something else. Let’s say that a diamond has been smuggled into the wasteland… and here is where the wasteland ends.”  –  Tom Robbins, Author of Even Cowgirls Get the Blues

It is only a long lived singer-songwriter career that lets JAMES LEE STANLEY unite the unpredictable creativity and the eclectic elements that make up his world. His remarkable ability as a vocalist and composer allow him to create songs, each recorded with a finely crafted backing that sonically enhance the impulse behind the lyric, coupled with his outragously hilarious repartee. He is one of the few all time greats and undisputed geniuses among singer-songwriters. Fi Magazine listed his FREELANCE HUMAN BEING as “one of the finest recordings of 1998 and one of the Top 200 Recordings of all time.” – FI Magazine March 1999. 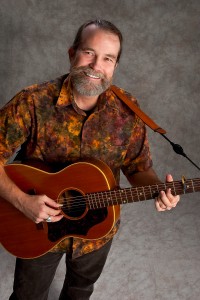 A 2014 Winner of the Grassy Hill Kerrville New Folk songwriter contest, Daniel shares experiences from a life well-lived in places as far-ranging as Okinawa, Germany, Japan, and throughout the western U.S.  For three decades Daniel was a gun toting Park Ranger and Criminal Investigator in National Parks and Public Lands throughout the west and he started touring fulltime with music at 50. Daniel is a balladeer/songwriter and tours across the U.S and western Europe playing interesting stories about a variety of characters, including himself, played on guitar and banjitar (a banjo/guitar hybrid) with a deft fingerpicking style. His clear tenor draws positive comparisons to John Denver and Pete Seeger, and folks say there’s a lot of Steve Goodman in his delivery and storytelling. Other songwriting awards include Walnut Valley Festival, Santa Fe Bluegrass and Old Time Festival, Albuquerque Folk Festival, and Woody Guthrie Folk Festival. You can’t help but relate to Daniel’s songs!

“One of my favorite songwriters.” – Legendary Texas Songwriter Tim Henderson

This site uses Akismet to reduce spam. Learn how your comment data is processed.